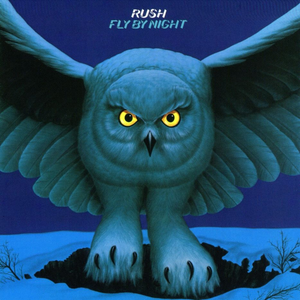 Fly by Night is the second studio album by the Canadian rock band Rush, released in February 1975. This was the first Rush album to feature drummer Neil Peart. In addition to drumming duties, Peart also took on the job of lyricist by default, leading the band to adopt a more literary lyrical style that differed significantly from the debut album. The songs "By-Tor and the Snow Dog" and "Rivendell" are examples of the inclusion of fantasy themes into Rush's music, although the latter was penned by Geddy Lee. "By-Tor and the Snow Dog" was inspired by Rush roadie Howard Ungerleider's story of him staying at Anthem records owner Ray Danniels' house, where his two dogs, a German shepherd growled at him, and a tiny dog tried to jump on him. Ungerleider told Rush about it and they thought it was hilarious. "Anthem" features lyrics inspired by the philosophy of Ayn Rand, whose influence on Peart's writing would reach its apogee on the band's 1976 album 2112. The autobiographical "Fly by Night" is based on Peart's experience of moving from Canada to London as a young musician (long before joining Rush), while "Making Memories" appears to be an account of experiences from the band's first tour.[citation needed] The original hand-penned lyrics for both "Anthem" and "Fly by Night" include different or additional lyrics not sung in the original songs. Although the original lyrics for "Anthem" include the line "carry your head", they are sung as "hold your head", as well as other minor changes such as a change from "anthem of the heart and mind" to "anthem of the heart and anthem of the mind". The original lyrics to "Fly By Night" include a prologue which is not found in the final song. Fly by Night was recorded at Toronto Sound Studios in Toronto. Rush also recorded parts of their first album at the same studio. However, since the first album sessions the studio was updated from 1 inch 8-track to 2 inch 16-track master tape recorders. The new equipment allowed the group to have far more flexibility in overdubbing and mixing. Pictures shown on the album artwork indicate that the studio used a Studer 16 track recorder and a Neve mixing console. This combination was widely considered to be state of the art by audio engineers. It was also used by many other top studios worldwide up through the early 1990's. Fly by Night marked the debut of Terry Brown as producer (although he had remixed their debut release.) This was a role he would maintain until 1982's Signals. All songs written by Alex Lifeson, Geddy Lee and Neil Peart, except where noted. Side one "Anthem" – 4:10 "Best I Can" (Lee) – 3:24 "Beneath, Between & Behind" (Lifeson, Peart) – 3:00 "By-Tor and the Snow Dog" – 8:37 I. At the Tobes of Hades II. Across the Styx III. Of the Battle Challenge and Defiance 7/4 War Furor Aftermath Hymn of Triumph IV. Epilogue Side two "Fly by Night" (Lee, Peart) – 3:20 "Making Memories" – 2:56 "Rivendell" (Lee, Peart) – 5:00 "In the End" (Lee, Lifeson) – 6:51 Credits Geddy Lee – bass guitar, classical guitar, vocals Alex Lifeson – six- and 12-string acoustic and electric guitars Neil Peart – percussion Chart Positions Country Chart Position U.S. Billboard 200 148 Sales Certifications Country Organization Sales U.S. RIAA Platinum (1,000,000) User-contributed text is available under the Creative Commons By-SA License; additional terms may apply.